The PRCA Climate Misinformation Strategy Group and Opinium have launched their second annual report, revealing PR’s important role in leading action on climate issues and the industry’s increasing confidence in the difference it can make.

The study of over 200 UK PR and communications professionals that took place in the six months following COP26 found that almost all (96%) were already advising clients and coworkers on climate change – a raise of 14% since last year.

On growing confidence to tackle climate-related issues and misinformation in their work, almost half said they’d encountered greenwashing, with 89% having pushed against false claims, and 57% having changed an organisation’s response. 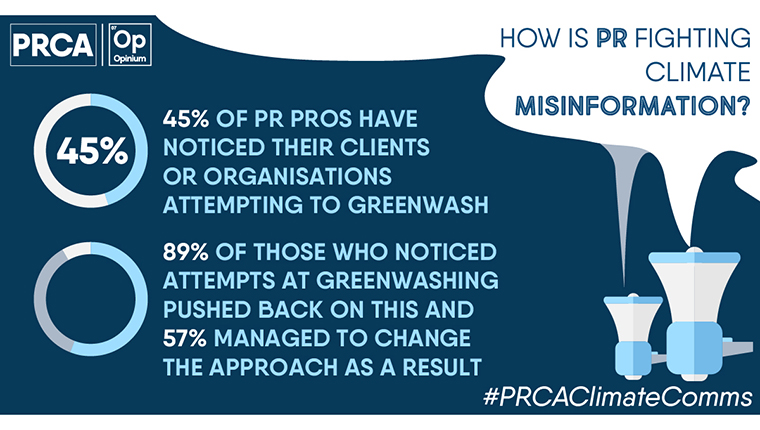 Other findings from the report include:

Adding to that 48% of PR and comms people who don’t yet measure carbon footprints, only a quarter (24%) currently set science-based targets.

On information from the public included in the study, 31% believed poverty to be the most impactful issue, and only half (50%) saw the man-made climate crisis posing an ‘existential threat’ to the planet – highlighting the need for inclusive and relatable communications from PRs when covering these issues.

‘We have a responsibility to ensure any unethical communication or attempts are challenged,’ said PRCA Climate Misfinformation Strategy Group representative Laura Sutherland.

‘The call to action to industry is this: be more brave – learn about ESG, learn how to approach a difficult situation with your boss or your client, start setting your own agency targets and communicate the action you’re taking.

‘Let’s lead by example and be the change we want to see.’

‘With seven in 10 consumers saying they would stop buying from a brand if they knew it had misled its customers about having a positive environmental impact, it is more important than ever that PR and Communications professionals support, consult and walk hand-in-hand with their clients on their journey to being better forces of good for our planet.’

Read the full second annual report from the PRCA Climate Misinformation Strategy Group and Opinium and compare with results from the first study here.

For more on greenwashing and how PR can combat it, check out these lessons from CIPR’s 2021 conference Climate Change and the Role of PR featuring insight from Climate Group’s Luke Herbert, Plastic Planet UK’s Sian Sutherland and #EthicalHour’s Sian Conway.

PR and comms inclusion networks to join and work with

Lighting and furniture adding up to your monsoon vibes

Bring monsoon blooms to your home with the Iris collection

A sustainable switch in your daily life